In China, the primary site of production of cellophane noodles is the town of Zhangxing, in Zhaoyuan, Shandong province. However, historically the noodles were shipped through the port of Longkou, and thus the noodles are known and marketed as Longkou fensi (simplified Chinese: 龙口粉丝; traditional Chinese: 龍口粉絲).[2]

In Japanese cuisine, they are called harusame (春雨), literally “spring rain”. Unlike Chinese glass noodles, they are usually made from potato starch. They are commonly used to make salads, or as an ingredient in hot pot dishes. They are also often used to make Japanese adaptations of Chinese and Korean dishes. Shirataki noodles are translucent, traditional Japanese noodles made from the konjac yam and sometimes tofu.

In Korean cuisine, glass noodles are usually made from sweet potato starch and are called dangmyeon (Hangul: 당면; Hanja: 唐麵; literally “Tang noodles”; also spelled dang myun, dangmyun, tang myun, or tangmyun). They are commonly stir-fried in sesame oil with beef and vegetables, and flavoured with soy and sugar, in a popular dish called japchae (hangul: 잡채). They are usually thick, and are a brownish-gray color when in their uncooked form.

In India, glass noodles are called falooda (see falooda, the dessert dish), and are served on top of kulfi (a traditional ice cream). They are usually made from arrowroot starch using a traditional technique. The noodles are flavorless so they provide a nice contrast with the sweet kulfi. Kulfi and falooda can be bought from numerous food stalls throughout northern and southern parts of India.

In Malaysia they are known as tanghoon (冬粉). They are sometimes confused with bihun (米粉) which are rice vermicelli. Sometimes also known as suhun or suhoon. 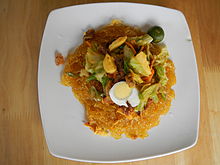 In Filipino cuisine, the noodles are called a similar name: sotanghon because of the popular dish of the same name made from them using chicken and wood ears. They are also confused with rice vermicelli, which is called bihon in the Philippines. 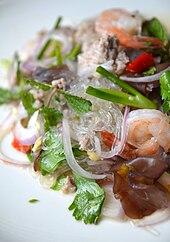 Yam wun sen kung: A Thai salad made with cellophane noodles and prawns

Glass noodles were introduced to Samoa by Cantonese agricultural workers in the early 1900s where they became known as “lialia“, a Samoan word meaning “to twirl”, after the method of twirling the noodles around chopsticks when eating. A popular dish called sapasui (transliteration of the Cantonese chop suey) is common fare at social gatherings. Sapasui, a soupy dish of boiled glass noodles mixed with braised pork, beef, or chicken and chopped vegetables, is akin to Hawaiian “long rice”.

There are no reviews yet.

Only logged in customers who have purchased this product may leave a review.

2021©The Feast || Designed, Developed and Maintained by : www.DigitalBridge.Ca